Return of the ants 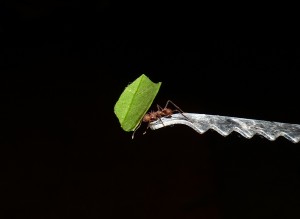 Turns out one foot of the table hadn’t been put into a wide enough oil container, allowing these persistent pillagers to cross the chasm, scale the table, and plunder again. So with almost perfectly dejavu detail we re-enacted the last night’s drama (with the one notable exception that this time I remembered to take

pictures of the ants!) The caterpillar seemed none the worse for the last two nights escapades when I checked on it this morning though.  On the contrary,  it seemed content as usual to move as little as possible on the branches provided while showing off its impressive new weight gain (caterpillars really do literally grow in size overnight). I had breakfast, reassured of it’s well being… only to come back an hour later and find it disappeared! Completely. I still can’t believe it. All that work and it escaped on me just as as it was about to form its chrysalis (I’m quite sure that’s why it escaped… apparently all the long sturdy branches I had made available to it were not good enough and it decided to take matters into its own…feet) It will be fine, it apparently didn’t need a food source anymore and is more than capable of finding a good place to pupate… but still all that fighting with the ants and no chrysalis to show for it?! *sigh* I guess I have to figure out a better table AND a better caterpillar box next time.

At least I have these two mystery caterpillar chrysalises to look forward to emerging… Any guesses what they’ll become? 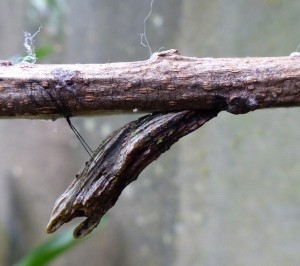 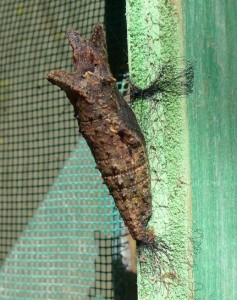